Summary: Humphrey Head was described by AW as the “odd man out” as it was outside the boundary of the national park at that time and even since the expansion of the Lake District National Park in 2016 the extension did not reach down as far as here. At only a height of 172′ this is at the opposite end of the spectrum to some of the lakeland giants not only in height but also for location and landscape. 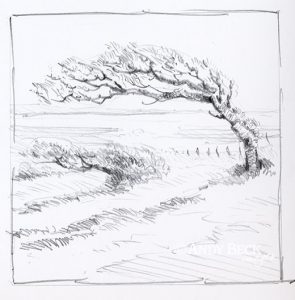 Points of interest: The views to the south across Morcambe Bay are extensive and to the east can be seen Arnside and Silverdale beyond the Kent estuary. The west side of the headland is formed by cliffs and there can be found a dramatic natural arch as well as a memorial plaque to William Pedder who died in 1857 aged 10. Humphrey Head is a nature reserve managed by Cumbria Wildlife Trust

(1.5 / 5) This star rating applies if Humphrey Head is reached via a walk from Kents Bank which add interest and variety of environment. If a visit is made by just parking at the end of Holy Well lane then the rating would drop to just one.